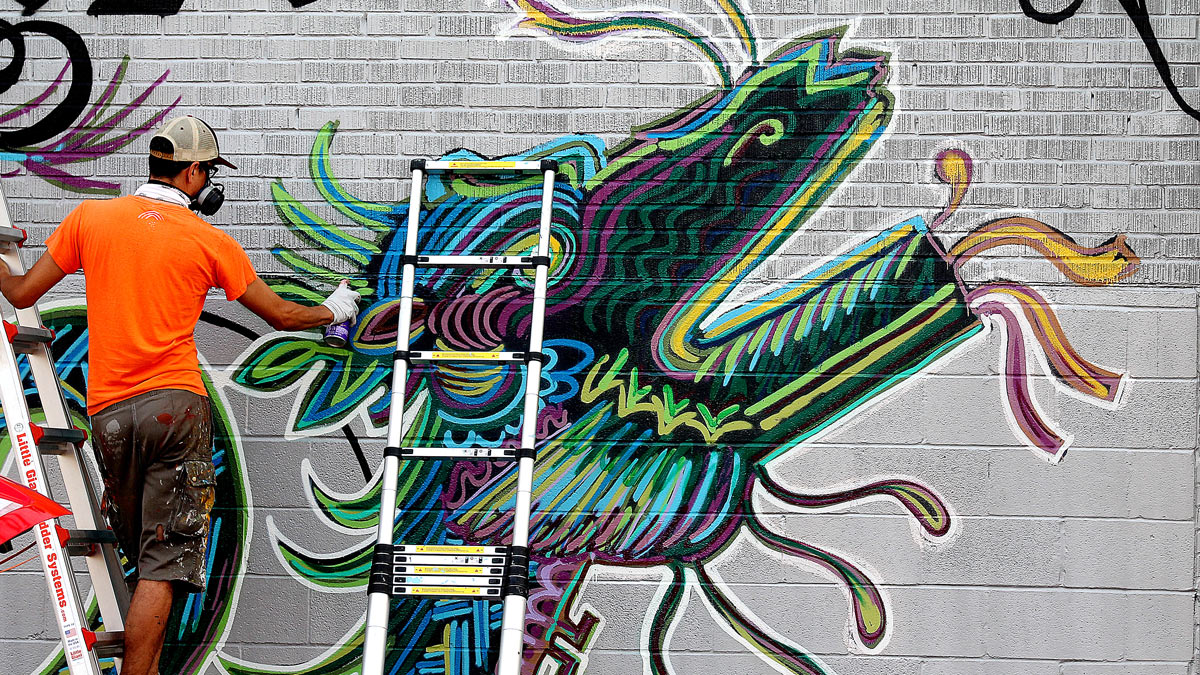 Maps of tour sites will be emailed to subscribers the week before the tours. Stops will include socially distanced, on-site Q & A with artists.

You can’t drive around Houston without running into a colorful mural, a graffiti message on a wall or over a bridge, a painted electrical box, or some other form of art on the streets. Who paints them? Are they commissioned works or the artists’ choice to claim a canvas around the city? Are the artists self-taught or have they received a formal art education?

The story of Houston’s street art scene and its creators is the subject of a discussion panel moderated by artist Angel Quesada and features fellow artists Daniel Anguilu, Anat Ronen, and Christine West to answer these questions and discuss the public art phenomenon from an insider’s perspective. Meet some of the creators and hear directly from the source some of the challenges and joys of bringing this type of art into existence.

Please join the Houston Seminar for two self-guided driving tours of murals in Houston’s thriving East End and the culturally diverse Gulfton area. Artists will be on site for socially distanced discussions about their works and the issues involved in creating these murals.

Angel Quesada has worked as a visual artist, producer, curator, exhibition designer, musician, arts administrator, digital editor, and ethnographer. He concentrates on large scale murals, creating dozens of commissioned pieces across the city. These murals rely heavily on their geographic and physical placement, utilizing the positioning of the sun throughout the day, the movement of shadows, and the societal context to create figurative as well as literal monuments to those places.

Daniel Anguilu is a well-known street artist who works as a METRORail conductor. Anguilu moved to Houston from Mexico when he was 14 years old with limited English. He learned to communicate through graffiti, painting close to 100 murals across Houston and abroad. He curates the Harrisburg Art Museum, an East End warehouse showcasing the work of graffiti and street artists.

Anat Ronen is a multilingual Houston-based self-taught artist who became a professional artist after her family immigrated from Israel. Ronen’s work can be found throughout Houston including on highways, bridges, buildings, churches, and schools, with works also displayed in museums and select shows internationally. In addition to murals, Ronen participates in international street painting and street art festivals.

Christine Jelson West joined Houston First Corporation as cultural programs manager in 2015. She serves as the curator and manager for both the permanent and temporary public art programs across all HFC assets. She also programs free public activities throughout the Avenida and Houston Theater districts.