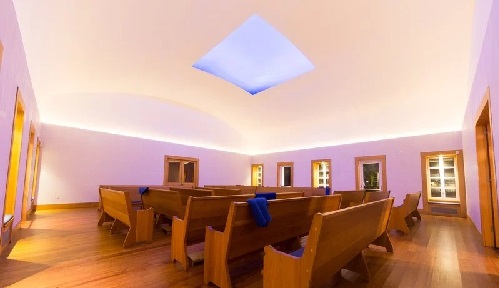 Places of Faith: An Architectural and Cultural Perspective

LIMITED ENROLLMENT. DIRECTIONS WILL BE PROVIDED TO SUBSCRIBERS.

Houston is a melting pot of cultures, faiths, and traditions. From a flourishing Muslim community to the lesser-known presence of the Quaker tradition, Houston has houses of worship to welcome them all. In this course, we will visit three distinct places of worship, each a reflection of Houston’s rich cultural diversity. Join us to learn how the specificity of design aligns with the needs and uses of these special buildings—not only as centers for religious practice but also as places for community gathering.

Completed in 2001, Live Oak Friends Meeting House was the idea of Houston gallerist Hiram Butler, who wanted to establish a new home for Live Oak Friends Meeting, a Quaker Meeting established in the early 1950s. The 12-foot-square skyspace in the roof of the main meeting room was designed by James Turrell, a preeminent artist who pioneered the use of light as medium. On this tour, Jane E. Houser, a life-long Quaker, will give an overview of the Quaker faith and tradition and of the construction of the building. At sunset, participants will gather beneath the sky space to experience the transformation of the spare, white meeting room into a luminous chamber that immerses one in the space of the sky. In case of rain, participants will visit a different James Turrell installation.

Light snacks will be available prior to the presentation. Food is not permitted in the meeting room but is allowed outdoors and in other spaces in the building.

Formerly the Houston National Bank, this prestigious neoclassical building, built in 1928, was converted into a mosque in 1994, when it was purchased by Hakeem Olajuwon, former Houston Rockets player and NBA star. The architectural and design heritage of the building was preserved during the conversion, including the structure’s spectacular gold-leaf domed interior and imposing limestone and marble colonnaded exterior. The former bank’s basement vault now houses an extensive library of Islamic texts. Ameer Abuhalimeh, executive director of the center, will lead us on a tour of the vault, the prayer hall, and the mosque’s museum of Islamic art.

Please wear comfortable shoes and note the use of stairs in some areas. Wheelchair accessible.  The center requires that all guests dress appropriately (modest, unrevealing) and that women bring scarves to cover their heads.

Established in 1872, Good Hope Missionary Baptist is one of Houston’s oldest churches. It was originally located in a fragile structure called a “brush arbor” in Freedman’s Town, where former slaves congregated to worship in Houston’s Fourth Ward. Good Hope’s history is intertwined with Houston’s political history: the church was active in the fight to desegregate the voting process. It moved into its current location on March 22, 1981, and was granted a Texas Historical Marker from the State of Texas Historical Commission in 2007. The current senior pastor, Dr. D. Z. Cofield, will lead participants on a tour of the modern structure and discuss the church’s rich cultural history. Lunch and a musical performance are included on this visit.