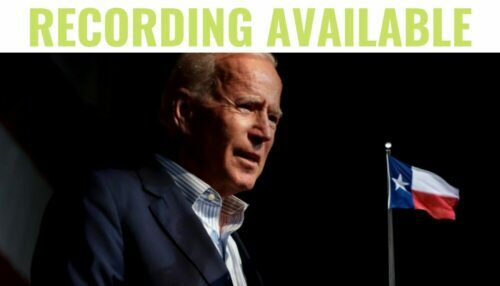 ZOOM INFORMATION WILL BE EMAILED TO SUBSCRIBERS.

The this course has passed, but there are recordings of the sessions available for purchase below. The Houston Seminar records most of its Zoom sessions and makes them available to registrants for the semester. If you purchase a recording from Fall 2021, you will be able to access it through the end of December. If you registered for this course before it took place, but did not receive an email for accessing the recording, please contact the registrar.

November 4: The U.S. Congress (Recording Available)
Democrats were handed the Congressional levers of government in January, though by the slimmest of margins. Sean Theriault will discuss how Democrats have risen—or not—to that challenge. What path has the Republican Party pursued in the minority? What do these records suggest about the 2022 midterm elections? What other key questions currently loom large for Congress?

November 11: The President and the Nation (Recording Available)
A year after the 2020 Election, an assessment of the Biden Administration’s record is in order. Richard Murray will assess how the 46th president is handling the Covid-19 pandemic, the economy, climate change, and relations with a closely divided Congress. Are there any signs of ending the “uncivil war” Mr. Biden addressed in his inaugural address? And what are his party’s prospects for avoiding major reversals at the polls next year as typically happens in midterm elections after a turnover in party control?

November 18: Future Prospects for Texas (Recording Available)
Texas filing deadlines for state and federal races in the 2022 elections are fast approaching. Richard Murray will discuss what we might expect in those elections: will the Lone Star State be solid red once again, or will it follow Georgia and Arizona in becoming a Sun Belt battleground? Democrats had high hopes of making big gains in Texas in 2020 but fell well short of their aspirations. What were the causes of their disappointment in 2020? Will things be any different next year?

Sean Theriault, a Distinguished Teaching Professor at the University of Texas at Austin, has received numerous teaching awards and is the author of several books on congressional decision making.

Richard Murray taught political science at the University of Houston from 1966 until his retirement in 2020 and consulted on more than two hundred political campaigns. He remains a senior research associate at the university’s Hobby Center for Public Policy, specializing in political parties and elections, polling operations, surveys, and national, state, and local political developments.