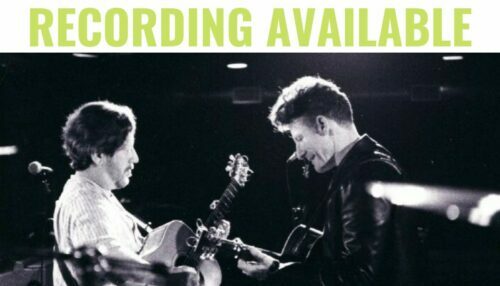 This course has passed, but there are recordings of the October 15 and 29 sessions available for purchase below. The Houston Seminar records most of its Zoom sessions and makes them available to registrants for the semester. If you purchase a recording from Fall 2021, you will be able to access it through the end of December. If you registered for this course before it took place, but did not receive an email for accessing the recording, please contact the registrar.

Houston’s music scene tends to fly under the radar, which may be why a unique “Houston sound” has emerged over and over, across multiple genres, to influence national and international musicians. Over time, memory of these pivotal home-grown moments has faded, but that history lives on in rare recordings, photographs, and other documents in local special collections. In this course, subscribers will visit three special-collection libraries to discover how jazz, folk, and hip hop music have been shaped by Houston musicians who carved out a distinctive, visionary Houston sound.

October 15 (Recording Available): The Texas Jazz Archive at the Houston Metropolitan Research Center, Houston Public Library
The “Big Wide Open Texas Sound” of Houston jazz was spearheaded by Arnett Cobb (1918–1989), the legendary Wild Man of the Tenor Sax. Join Cobb’s daughter Lizette Cobb and Abra Schnur, processing archivist of the Texas Jazz Archive from 2017 to 2019, as they give an insider’s tour of materials from 22 Houston jazz musicians. We will listen to recordings of the “Texas Tenor Sound” shaped by Arnett Cobb and his contemporaries and discover how these Houston talents would go on to play on the world stage with jazz legends such as Louis Armstrong, Ella Fitzgerald, and Dizzy Gillespie.

October 29 (Recording Available): The Houston Folk Music Archive at Woodson Research Center, Rice University
In 1961, the Jester Lounge, the first folk venue in Houston, fostered what began as a celebration of traditional folk music in the city. In only a few years, members of the burgeoning scene like Townes Van Zandt and Jerry Jeff Walker began writing their own songs. They paved the way for subsequent singer-songwriters who merged folk and country music, such as Nanci Griffith, Lyle Lovett, and Lucinda Williams. Norie Guthrie, the archivist and librarian for the Houston Folk Music Archive, will present some of the journals, scrapbooks, photographs, lyrics, posters, and other ephemera that date from Houston’s local folk scene from the 1960s through the 1980s.

November 12 (No Recording Available): The Houston Hip Hop Collection at the University of Houston Libraries
Houston hip hop has a unique sound that has influenced contemporary artists such as Beyoncé, Drake, and Solange Knowles. That sound was developed primarily by the late DJ Screw, who created the innovative production technique of “chopped and screwed” for his underground cassettes in the 1990s. Among the riches of the Houston Hip Hop Research Collection are original mixtapes created by DJ Screw (1971–2000), notebooks of rap lyrics by the late rapper HAWK, promotional photographs, fliers, T-shirts, and recordings. Julie Grob, the founder and curator of the collection, will present materials that capture the creativity and drive of the musicians, producers, visual artists, and entrepreneurs who built an independent music scene of global influence.