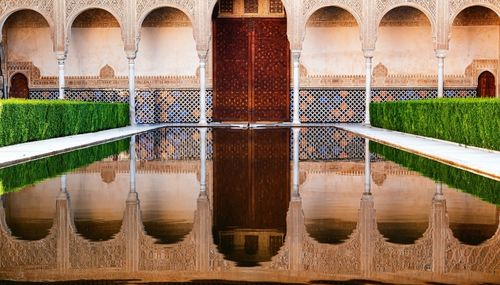 Paradise is a Garden: Islamic Gardens and their Reach

From Eden to the Hanging Gardens of Babylon to the Taj Mahal, gardens have captivated visitors and armchair travelers for eons. Garden history can be understood in many cases as political and imperial history. Designed for exclusivity, pleasure, sanctuary, and evidence of aesthetic prowess, formal gardens operated as sites of political power and earthly manifestations of the ideal.

In this course, Lisa Balabanlilar will trace the course of the pleasure gardens of imperial Iran (beginning with the Achaemenids of the sixth century BCE) as they spread west in the eighth century to Andalusia, Islamic Spain, and east through Central Asia to Mughal India. The forms and features of the paradise garden would find new expression in the landscapes of Renaissance Italy, finally moving north to early modern Europe. While understanding the garden as art form and sacred space, this class explores the relationship between landscape and power, emphasizing the complexity and dynamism of the imperial pleasure garden tradition.

Lisa Balabanlilar is a professor of history at Rice University where she has received numerous prestigious teaching awards. The focus of her research is the Timurid-Mughal Empire of Central and South Asia; her broader research interests encompass Islamic South and Central Asia and early modern Islamic Empires (Ottoman, Mughal, and Safavid). Professor Balabanlilar’s most recent book is The Emperor Jahangir: Power and Kingship in Mughal India (I.B. Tauris, 2020). Her current book project is a comparative global study of imperial pleasure gardens called The King’s Garden.