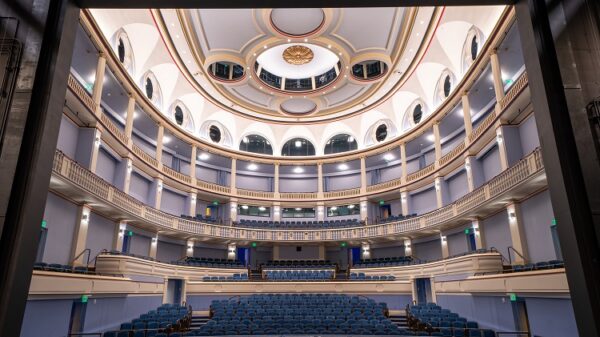 DIRECTIONS AND PARKING INFORMATION WILL BE PROVIDED TO SUBSCRIBERS.

A long-time dream of former Shepherd School Dean Bob Yekovich, the arts center includes acoustically superior performance spaces for students at the Shepherd School as well as rehearsal halls, teaching studios, and practice rooms. After touring the 84,000-square-foot structure, designed by acclaimed architect Allan Greenberg, we will be able to see a class in the Lucian and Nancy Morrison Theater, a three-tiered, six-hundred-seat, European-style theater with an orchestra chamber for 70 musicians.

A graduate of the Oberlin Conservatory of Music and the University of Rochester’s Eastman School of Music with bachelor’s and master’s degrees in violin performance, Matthew Loden has built an extensive resume as a performer, competition adjudicator, university lecturer, and advisor with some of the top music training programs throughout the U.S., including the League of American Orchestras Management Fellowship. Prior to his role at Rice, Loden was CEO of the Toronto Symphony Orchestra, and before that, interim co-president and executive vice president for institutional advancement of the Philadelphia Orchestra. He has also served as board secretary for the Academy of Music, and as vice president and general manager at the Aspen Music Festival and School.